A really excellent show – Fair Trade, an exhibition of collaborative work by ex-TAFE Arts and Media teachers from TAFE Goulburn and Moss Vale campuses was nonetheless tinged with sadness.  When the idea for this exhibition was formed none of us had any idea that all public funding for the courses we taught would be withdrawn. So the exhibition was in a sense a goodbye. I’ll miss the interaction with fellow teachers, and the students, and the close working relationship our programs had with Director Jane Cush and her team at the Gallery.  What a loss all round!

The original idea for the show was for the printmaking teachers on staff – myself, Cecile Galiazzo, Tony Ameneiro, Julie Krone and Kath Orton to collaborate with staff teaching other media to make a portfolio of prints.  But the idea grew and evolved and in the end a much more interesting, varied and stimulating exhibition was produced.

Our numbers fell as some of us had other commitments and withdrew, so we ended up with nine artists working in pairs – Cecile and Andy Townsend, Tony Ameneiro and Kim Shannon, Simon Bowley and Britta Stenmanns, Bev Hogg and myself and also Kathy Orton with myself.

Kathy and I – both printmakers, collaborated on a series of one off images of trees each of us overprinting the other’s work. Canberra-based ceramic artist and sculptor Bev Hogg and I after much discussion ended up going in the opposite direction to the original idea.  Our sculptural piece made of sticks is in one sense a translation of my mandala prints into three dimensions.

I have not really worked collaboratively before but both experiences have been enormously enriching for me and in both cases we plan to do more together. The gallery has produced a lovely little catalogue. Check it out and watch out for more developments! 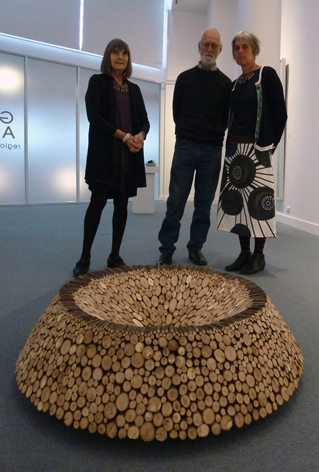 Marianne, Bev, their sculpture ‘Groundwork’, & Robert Crombie
top: Marianne and Kathy Orton with some of their work at the opening