Food for Thought is another collaboration with Bev Hogg made for Contour 556, Canberra’s Public Art Biennial held in Canberra around the foreshores of Lake Burley Griffin in October every second year. It was subsequently exhibited on the NSW South Coast in April 2019 in Sculpture Bermagui.

In Food for Thought our focus shifted from using organic gathered and found materials to using plastic waste highlighting the harm such materials cause to nature and the environment. The work up-ends the Adam and Eve story of temptation and the fall of mankind. Here the human figures, already enmeshed in the waste of consumer society, offer the serpent ‘food’ from their world – with all its negative implications.

After a number of months of exposure to the elements the hard waste plastic material that encased the two figures began to degrade so we dismantled them. The plastic bags and wrapping used to make the serpent have proved to be almost indestructible (a disturbing outcome in itself) and so the serpent now spends its days up a gum tree, out of the children’s reach, in the playground of St Bede’s Primary School, Braidwood. 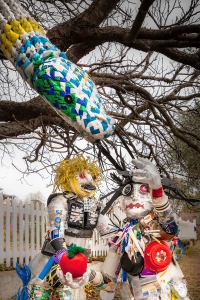 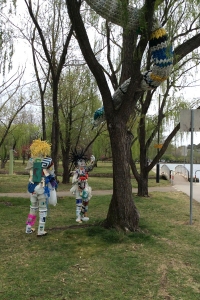 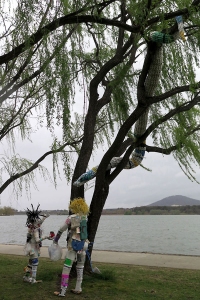 Most of my work is concerned with the natural world so these small 3D studies are a departure from my usual subject matter. But what they have in common with all my work is a love of form – the shape of things and their defining details. They are not scale models. Rather they are my interpretations of some of the familiar features of our main street. I have omitted details that for me didn’t add to the character of the building or detracted from the overall form and I chose for harmony and cohesion to work with a natural palette that doesn’t relate directly to specific colour schemes or finishes. For me, the making and drawing has been a pathway to a much deeper affection for Braidwood’s old buildings because it forces you to really look and look again until you finally see and understand what it is that gives each structure its own special character. 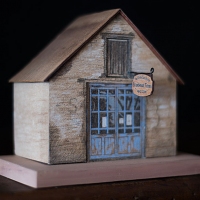 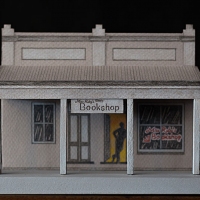 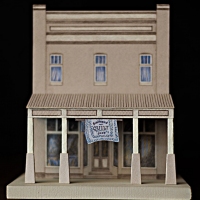 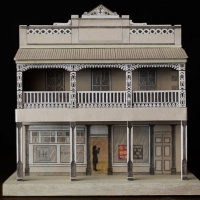 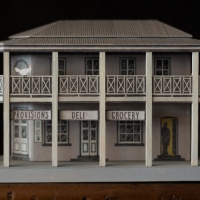 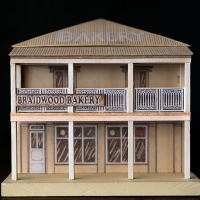 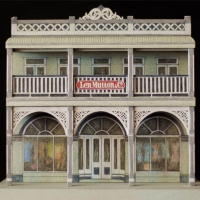 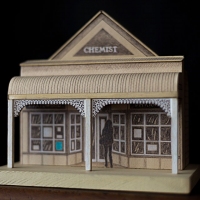 An ephemeral collaborative work with Bev Hogg made for Contour 2016 Canberra’s new bi-annual public art festival on the foreshore of Lake Burley Griffith. Growing Ground references both the original grassy woodlands of the Canberra area and the overlay of patterns of land-usage that accompanied European settlement – boundaries, fence-lines, paddocks, the earth ploughed, furrowed and planted. It also contrasts these pasts with the present mowed and manicured locale. 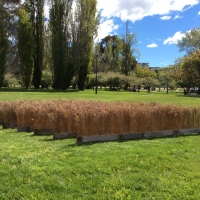 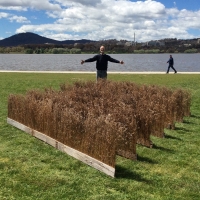 An on-going collaboration with Bev Hogg. Groundwork evolved from the exploration of ideas and processes around both artists’ respective practices and a common interest in working with natural materials.

Thematically the works are about holding and valuing the natural world – of taking essential elements of garden or bush-land – fallen sticks, gravel and clay and translating them into semi-ritualistic meditative works that speaks of growth, wholeness, and also vulnerability. 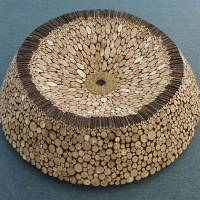 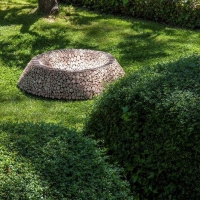